Czick on the road / Brazil / Paddle, paddle, jump - How I was learning surfing in Brazil

Paddle, paddle, jump - How I was learning surfing in Brazil

August 18, 2018
Am I too old to surf? How hard is it to learn surfing? These questions were running through my head during the first rainy week in Ubatuba. I was determined to try surfing even if I had to grab the surf and do it on my own. Luckily, it’s not that hard to find a surf lesson in Brazil. 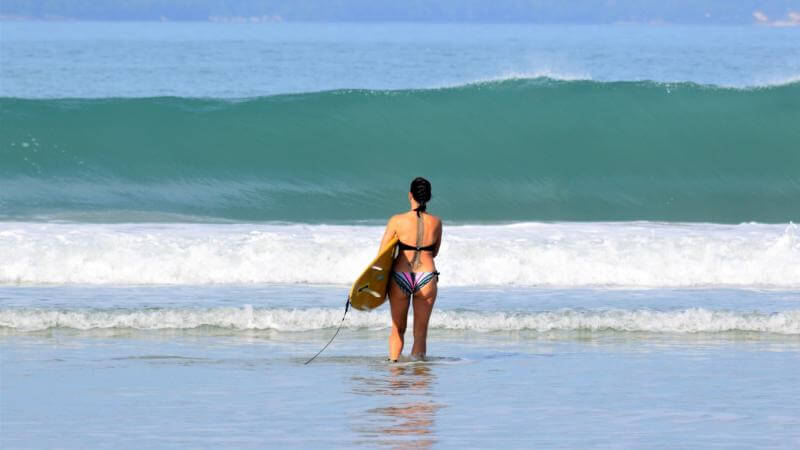 One of the reasons I’ve chosen Ubatuba as our next volunteering destination was the fact, that it was the Brazilian surf capital, holding several surfing competition every year and even the national surfing competition. I was sure this is the best place where to search for surf lessons in Brazil and try this awesomely sexy sport all my friends are so crazy about. I could already see myself carrying a colorful surf towards the ocean and then riding the wild waves like the biggest pro.

How I was searching for a surfing teacher

One would say that finding surf lessons in Brail’s surf capital won’t be that hard, but being there in the winter made it slightly harder, and so did my lack of Portuguese speaking skills. As we were driving through the city I was keeping my eyes wide open searching for surfing school ads. I only saw one and quickly snap a photo of the phone number. I was not very surprised that nobody replied to my English message… OK, let’s do it old school.

I found out that the beach collecting all the surf teachers is Praia Grande. So I went there to find my teacher. I don’t know what I was expecting, but there was no sign of school on the beach. But then I saw a surfer. You know, the real one. With long dark hair, tanned skin and exactly the perfect body that is presented to us in American movies. I’m not a teenager anymore, so I’ve approached him fearlessly:

“Hi, do you speak English?”

“Ehm… a little bit” He replied. Good enough I thought.

“Do you know who can teach me surfing?” I asked, hoping he would offer his services.

“Oh yeah, there is this guy, let me check…. Hm, looks like he’s not here today. You should try tomorrow…. or, did you think if I can teach you surfing?” Finally, we are getting somewhere...

“Can you?” I asked innocently, already imagining how his strong arms are hugging me to demonstrate the right position on the surf, he’s smelling of sun and sea, our eyes will meet, and…

“No, sorry, I can’t” Of course you can’t, I knew this could happen only in American movies…

“No worries, I’ll try tomorrow…” I said, pretending I mean it and returned to my boyfriend standing nearby, about whom, honestly, I forgot for a second.

I was not brave enough to snap a quick picture of him, but one from Shutterstock will do. Add awesome tattoos and shoulder long hair and I swear that’s exactly how he looked.

So, this didn’t work out, what now? I was already seeing myself studying the surfing techniques on Youtube when I got a perfect idea. What about asking Sergio, the owner of our beach house, maybe he has some friends who could teach me surfing. And he had!

How hard is it to learn surfing

I met with Paulinha on Monday morning in front of our beach house to pick the best surf Sergio had at disposal. All of them were small and Paulinha scared me that surfing on those will be really hard for a beginner like me. Luckily, on the way to the beach, her ex-boyfriend drove by in his VW van (every cool surfer in Brazil is driving a VW van, no, it’s not a stereotype) and he had a big surf with him. So after only 30 minutes of waiting for these guys trying to sort out who’s gonna take care of the kids this weekend, we finally could continue to the beach.

We arrived at the beach at 9:30 and it was not as empty as I was hoping for, too many witnesses of my failure I thought… Paulinha draw two surfs on the sand to show me how to lie and stand on it and how to jump up. This lady in her 40s, with 5 kids (2 of them with before mention ex), quickly jumped up to the textbook surf position.

“Now it’s your turn,” she said. I slowly lied down on the sand.

“Paddle, paddle, jump!” My bones cracked several times and sharp pain in my lower back signalized me that after all, I might be too old to surf.

“You are a goofy,” she said. Maybe she heard the bones cracking? No, it means I put the different leg in the front than the majority of people. Uf, that’s not that bad… I’ve tried the paddle, paddle, jump several more times before we continued towards the roaring waves. The ocean was quite angry that day and I couldn’t help but fear what’s gonna happen in the water.

We walked towards deeper water, trying to synchronize the English-Portuguese terminology. Paulinha maybe was a good surfer, but her English was not the best. All agreed, I lied on the surf and as I found my balance, the biggest wave I’ve ever seen was coming. Or was it just that I looked at it from below? Paulinha turned me by 180 and started screaming “Paddle, paddle.” And I was paddling, paddling, but felt like compared to the power of the ocean I was not paddling enough. Then the wave caught me. Whooooaaaaa. I grabbed the sides of the surf not even trying to do finish with the jump. It was, like, the most awesome rollercoaster I've been at. Can I just lie and slide on the waves?

Nope, let’s do this again. After several paddle, paddle, jump attempts I actually managed to get on my knees several times and then even did few fast squats. Yeeeah! After one hour in the water, I could not paddle nor could I jump, my hands refused to cooperate and it was time to go home. I knew the next day the worst muscle fever will be waking me up.

Plan your vacation in Brazil with the best travel guides:

How I was surfing on my own

Knowing the basics now, I was brave enough to continue learning on my own. I borrowed a big board from Sergio, so nothing could stop me. Exactly 3 days later, after the worse muscle pain was gone, I and Primoz headed towards the beach again. Me carrying the surf, he carrying the camera to eternalize my surfing attempts. I didn’t want to wear the neoprene, it was still wet and really hard to put on. Besides, photos in bikinis are much sexier, right?

I headed to the water carrying my big yellow surf. When the water was waist high, I lied on the surf waiting for the wave. And it was coming, and I was trying to turn, and I managed, and just as I was starting to paddle, paddle, the wave caught me, but instead of jump, the surf continued with the wave on its own and I stayed where I was… What just happened? Simply put, the wave stole my surf, my skin was too slippery, the surf was not waxed and that’s not the best combination. I tried a few more times before I realized, I just have to return home for the neoprene and some candles.

Fully equipped with neoprene, surfed marked by candle wax, I was ready to reach the stars. I gave up on waiting for the wave facing the ocean and instead jumped on it when already turned in the right direction when the wave was coming. Paddle, paddle, jump happened several times and I cannot describe to you the feeling when I finally managed to stand up. Well, it was more of a goofy squat and I fell right of, but nevertheless, I did stand for a split of a second. Long enough to let Primoz snap a cool photo.

And that’s it, that’s the story of how I was learning surfing in Brazil. I did go to try one more time, this time with properly waxed surf and it was much less slippery, but being tired from previous days, I didn’t do much better.

Remember, we are never too old to try something new and however hard it can be, the experience and memories will be worth it. So, who wants to go surfing with me?

Prev:
What we did in 4 days in Rio de Janeiro
Next:
Our visit of Tamar project in Ubatuba and why to reduce use of plastic


Paddle, paddle, jump - How I was learning surfing in Brazil
Follow us
About us