February 20, 2019
Chavin de Huantar is considered one of the oldest archaeological sites in Peru and is connected to one of the most mysterious and powerful cultures of this area. It lies in the middle of the Cordillera Blanca mountain range near city Huaraz, at the high altitude of 3000 m and hides many secrets - read about them in this article. 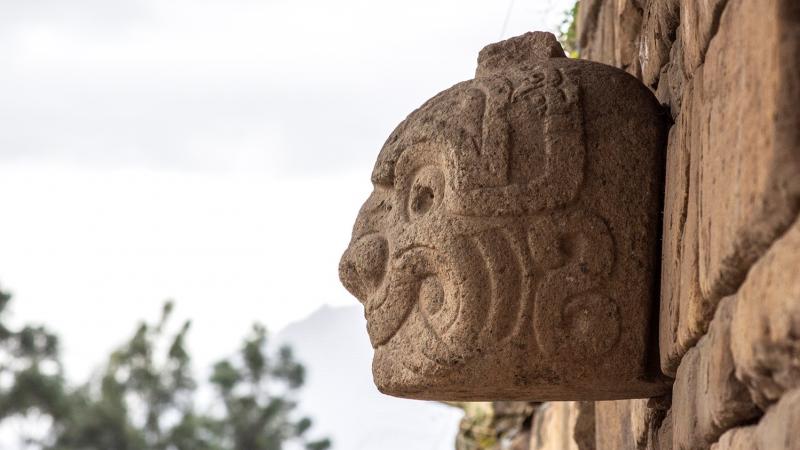 The best way how to get to Chavin de Huantar is by car, public bus or organized tour. We've visited on our own and used the services of one of the guides waiting in front of the entrance – unluckily, he only spoke Spanish so my interpretation of his words in this article might be a bit creative. Though we only heard the story in Spanish, I was still very happy we hired him, as our guide was very knowledgeable, also because unlike in many other archaeological sites in Peru, including Machu Picchu, in Chavin they actually have loads of information about the Chavin civilization.

So what is Chavin de Huantar? Chavin is one of the most important archaeological sites in Peru dating back to 3000 BC. It lies on a strategic place protected from two sides by rivers (Mosna and Huachecsa) and high mountain at the third side – the triangular shape of the area is not random, as the ancient Chavin civilization built the place here believeing that triangle can withhold strong natural energy. The main area contains a pyramid-like stone construction with hidden labyrinth inside and two plazas outside. Both inside and outside areas were built as a place for ceremonies and based on archaeological excavations and remains of food and objects found in this place, archaeologist believes people from the wide area of Peru and Amazon were gathering here. The whole area, inside of the pyramid as well as outside plazas are nowadays available to public…

As we were walking on the green grass of Chavin de Huantar, our guide Eduardo was telling us unbelievable stories of this ancient Peruvian civilization. Beside human sacrifices, drug ceremonies and the cult of a woman, we heard stories of everyday life in this interesting cultural centre of ancient Peru.

One of the most shocking facts about Chavin is, that archaeologists have proofs of human sacrificing ceremonies, where bodies were not only killed but also cooked and eaten. In the ground were found remains of human bones which show marks of boiling, baking on fire and cuts by knives. The ceremonies were probably held only for the highest social classes and priests and started on the main plaza in front of the pyramid, where fests with loads of food as well as hallucinogenic drugs were held. Part of these ceremonies might have been also human, animal and plant sacrifices – remains were found in watering channels, where the sacrifices were dropped in a typical Chavin pottery.

But these watering channels were not created only for safety in flood times, a scientist Miriam Kolar believes they were important for creating sounds during the ceremonies. When water was poured through the channels, it created a tremendous sound echoing in the whole area and the labyrinth. The importance of sound in Chavin culture was later supported also by discover of numerous pututu – an instrument created from a big sea shell. (see sources for more)

Blood created visions of the future and past lives

The ceremony then continued for regular people outside, while the priests and priestesses moved inside of the pyramid – into the dark halls of the labyrinth. Deluded by hallucinogenic drinks made mostly from San Pedro cactus, Ayahuasca and other plants, they were wandering through narrow corridors of the labyrinth, with just a little light brought inside by smartly placed mirrors.

The goal was probably to find the Lanzón - a 4.5-meter long piece of granite, carved in the form of the most important Chavín deity. Presumably, blood was poured at the top of Lanzón stone from the upper area and slowly flowing down through the carved channels supporting the priestesses’ visions of future and past lives. The Lanzón is still placed in the middle of the labyrinth which visitors can enter to feel the presence of old Chavin gods.

Women leaders in one of the strongest Peruvian civilizations

The most interesting fact to me was, that based on some theories, the Chavin civilization was a strong cult of a woman, where the highest priestesses were actually women. The most important symbols can be found on a stone desk Estella Raimondi, with a non-gender specific carved figure. And all over this places are other proves of female duality – dark and light, an eagle and a hawk, a Spondylus shell and a Strombus shell…

Our guide seemed to be a big fan of the idea of a Chavin as a cult of a woman, as he even mentioned a possibility that the whole temple was built by women. Nowhere else though, in official UNESCO documents and another website, not in the local museum Museo Chavin de Huantar have I found any other mention of this special feature. But as we are living in a man's world, this is not a surprise, is it?

Gallery
Read about other ancient civilisations in Peru

We finished the tour by climbing to the top of the pyramid, walking in its dark labyrinth and eventually coming to a point, Chavin is famous for – the stone heads incorporated into the exterior walls of the main building. Nowadays, only one head is still proudly hanging on the high pyramid walls, the rest of them is safely stored in the local museum Museo Chavin de Huantar. These three-dimensional heads represent mythical creatures, hybrids of human and animals – some of them resemble more human faces, some of them look more like heads of animals.

We headed to the museum after our visit of Chavin archaeological site, to see this remarkable collection of stone heads in South America and gather some more information about this interesting archaeological site in Peru. The museum is very nice, with many videos from the archeologic excavations as well as animated reconstructions of some aspects of the life of Chavin civilization. Although not all information is translated into English, I highly recommend a visit of this museum as it was incredibly interesting and especially the video from Archeological excavation, which is in English, gave us some more insight about this ancient Andean civilization.

Nowadays, only a small part of this remarkable temple is excavated, as the area is a place of frequent earthquakes, floods and landslides. Which is also one of the reasons, why this ancient civilization may have vanished. Or it could have been an appearance of new religion and diminished importance of this place. The real reason why the civilization of Chavin de Hantar vanished remains unknown. Chavin de Huantar is registered as a world protected heritage by UNSECO.

Online article Tuned to the Senses: An Archaeoacoustic Perspective on Ancient Chavín

*All photos were made during my visit.

Would you like to visit Chavin one day? Pin this article to your travel destination board >>

Prev:
8 amazing things you should do in Ica, Peru
Next:
The most underrated archaeological sites in Peru