Driving in Bolivia – tips and tricks for safe roadtrip

May 30, 2018
If you are planning a road trip through South American countries, you might wonder if is Bolivia safe to travel by car? We learned a lot what would make driving in Bolivia easier and decided to share our tips and tricks with other drivers drivers. 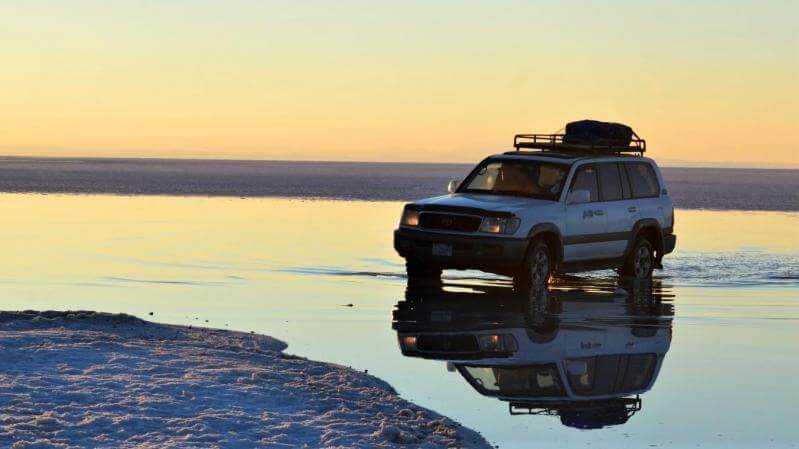 The first thing you might wonder about is the Bolivia gas price. That is quite a peculiar question, as Bolivia has different prices for foreigners and Bolivians. In 2018, the gas price for Bolivian citizens was 3,46 BOB and for most foreigners 8,68 BOB (a bit over 1€). This can be easily hacked though. Although every time you buy something, you have to give them your ID number, at smaller petrol station you can try to ask to take petrol without bill “sin factura”, they would buy it with their ID number and the price for you would be 5-7 BOB.

Another option is also to take gas in small villages, often you just see a sign in front of a house saying “hay gasolina”, their prices are usually 5 BOB, the quality of the petrol though is questionable. A very important info regarding Bolivian gas prices is also, that not every petrol station can sell gas to foreigners (it’s something about the setting of their cashier computers), so don’t leave taking petrol for last moment, you could be left with an empty tank.

You will also like: La Paz - a fascinating Teleferic tour for every budget

What is the quality of roads?

Quality of roads varies a lot throughout the whole of Bolivia. At first, I was surprised, how good the roads are, and then I found out it’s not a common rule. Roads can be shitty, especially in the more distant and less frequent mountain areas. It can happen very fast, that a nice and new asphalt road turns out of nowhere into a dirt road with huge holes. Many roads are also under reconstruction and you have to take a detour on very dusty and ugly road.

Whose turn is it at roundabouts?

Which mobile apps are trustworthy?

The quality of roads, as well as the mountain terrain, can double the time of driving in Bolivia. We soon realized that the driving time shown on our apps was not quite right. While Google maps were more or less OK, another popular GPS app Maps.me was not to be trusted at all and driving time shown there was always half less than reality. On the other hand, Google maps often took us off road to the worse terrain, while Maps.me seemed to know the better roads. If you know any GPS app, which works great in South America, don’t hesitate to share with us in comments.

Why are roads sometimes blocked?

One special thing Bolivians like to do is block the roads between cities. Reason for this is often political, this is their style of protesting. The blockade can last weeks, so always check with somebody (hotel, road checkpoint) if the road to the city you are heading to is free. It can also happen, that you are trapped inside of the city, in such case, sit back and relax, there’s nothing else you can do.

You will also like: The best outdoor things to do in Sucre, Bolivia

How to pass road checkpoints and tolls

Road checkpoints are common in Bolivia. Sometimes you just pay the toll and continue, sometimes, you had to go to the nearby police station and show them all your documents. Be careful with paying the tolls, before we realized this, we probably paid double – on longer roads, there are many toll stations, they usually ask you where you go, and then charge you to the final destination, on the next toll stations then you shouldn’t pay anymore and just show them the ticket which they stamp. To make this process faster, make sure you have all documents ready in one folder – passport, international driving license and car entry document (make a copy, they might want to stamp it).

We heard a lot about Bolivia corruption before we came here and expected to pay every time we meet the police. To our surprise, this didn’t happen. We paid a small amount at the borders with Peru, then 2 months nothing. We were checked often at the road checkpoints, they looked at the documents, sometimes gave us a stamp on the copy of entry document, then we continued. I almost started to think, that there is no such thing as Bolivia corruption until we came to Santa Cruz department. Every checkpoint officer has a small container with coins, and everybody is expected to spit some change in it.

If the officer is in bad mood, or if you don’t give them enough, he might want to check your car for the mandatory equipment (there is a list of it at every border, make sure you have everything). And this is how they got us, we didn’t have the triangle – fine 100 BOB, unofficial, of course. The second time, it was worse and totally unjustified. On the road, 100 km from Brazilian border, we were stopped and officer claimed we miss one stamp from a checkpoint (we never got any stamp until coming to Southern Bolivia). We don’t speak much Spanish, so we didn’t argue with him, also we didn’t really know what we can afford to do and what he can do to us (can we just leave, can we refuse to pay, should we go back and wait for them to leave?). So we paid, 300 BOB slipped into his pocket and brought a wicked smile to his face… In two months in Bolivia, we made a “contribution” to the Bolivian police in a total amount of 80€, a majority of it was in Santa Cruz department.

Is Bolivia safe to travel by car?

Other travelers often ask us if is Bolivia safe to travel by car. Though many guides highlight potential danger when traveling in Bolivia, we felt safe most of the time. We drove often at nights and also walked a lot through more distant parts of cities in early evenings and nothing ever happened to us, but maybe we just got lucky. Therefore, certain precaution should be always made. Basic rules you can stick to are following:

Prev:
Salar de Uyuni – sunset & sunrise that will take your breath away
Next:
Top 8 places to visit in Bolivia – travel tips and tricks