Inti Punku - one of the most beautiful hikes in Sacred Valley

March 11, 2018
Inti Punku literally means Sun door in Quechua, we haven't got much sun while being up there, but we sure got a wonderful view at the valley and the clouds hiding 6000 m tall snow peaks. 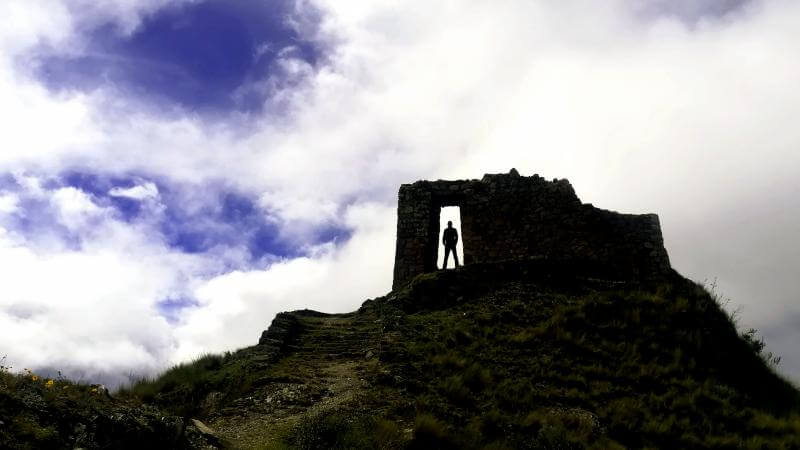 Inti Punku is a small Inca's ruins hiding at the top of a 3900 m tall hill. We started our hike in Ollantaytambo, near a bigger parking spot where we left our car (that parking was opened only till 18:00, big mistake as we found out later). From the parking spot, we walked through few cute cobbled streets and agricultural terraces towards the Inca's bridge, after which the hike up started. Here we also got our hike companion – a cute puppy which I called Piškot (Cookie), though I didn't have any cookies for him.

The mystery of Inka's masonry

A nice ascent slowly lead us to our first destination – Inca quarry from which stones were brought to Ollantaytambo to build the temple and the fortress. Many finely carved stones were also lying on the road up, the tired stones, piedras cansadas as locals call them, were probably left on the road when workers were hurrying to carry the gun to support Manco Inca in the fight against Spanish invaders – they never came back to finish their work...

The place of the quarry is not marked with any sign, but we knew right away we have arrived. Smaller and bigger stones were lying everywhere – roughly or nicely carved, some were ready to go, some were just cut off the rock. In this quarry is a marked path, which takes you through the site to explore it further, at one point we found a nicely piled rows of stones – maybe Incas left it like this, ready for the transport, maybe some modern human was playing with them, we will never know.

Want to do more hiking in Sacred Valley? Read about our hike to Chicon glacier here >>

A majestic reminder of a once powerful nation

Continuing towards the Inti Punku, we found another Inca's ruins. Several buildings with typical Inca’s architecture were standing just under the misty peaks. In my opinion, those were house to accommodate workers at the quarry. They probably worked in shifts and therefore these buildings are a bit further, so the noise would not disturb them. In one of the walls of these houses, I found pages ripped out from the Bible – maybe the one Pizzaro has given to the great Inka when he came here?

Want to discover more Inka's ruins in Sacred Valley? Read about the most beautiful ones here >>

Just one more hour walking and we have finally reached the spectacular Sun door Inti Punku. In front of us was rising a reminder of once powerful and huge nation. White clouds behind it were replacing the snowy mountain peaks and we could enjoy this beauty all for ourselves If it wasn’t for the late hour and our car parking, I could sit here for hours, waiting for the clouds to disappear and eventually enjoying the sunset, thinking about all the stories which happened here, about the hidden treasures and broken hearts of this inspiring ancient culture. Maybe once I will write the stories down for you, would you like that?

Our hike to Inti Punki in numbers:

Prev:
Hiking the Chicon, a magnificent mountain above Urubamba
Next:
Inca’s ruins in Sacred Valley – the small & the big