La Paz – a fascinating Teleferic city tour for every budget

April 5, 2018
I wasn't very excited by visiting the city of La Paz, but I immediately fell in love with it. You won’t find here much of a beautiful colonial architecture as in other cities, but maybe that’s what makes it special and a bit different. Another thing is its fascinating public transportation – which runs in the air! 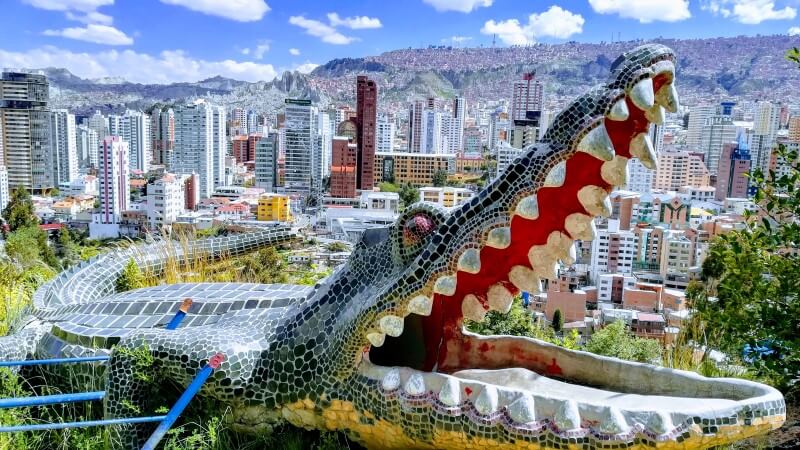 The thought of visiting another huge city was quite repellent to me. I still had a clear memory of stinking and overcrowded Lima, with overpriced restaurants and bars and terrible traffic. But La Paz has surprised me, in a very positive way. Compared to Lima it is a nice and clean city, which maybe doesn't have much colonial architecture and green parks, but it has other advantages. Beside the mountains surrounding it, where we went for one or more day trips (read about our climb to Huayna Potosi and unsuccessful El Choro trek) I was mostly fascinated by their public transportation system - besides typical buses and taxis there is a cableway crossing the whole city, which shortened the transport from one side of the city to another from one hour to 10 minutes!

Browsing the city from the air

The first thing we noticed when we have arrived at the city were the Teleferic cabins above us, which we only knew from the European ski slopes. Then our host Ricardo told us about a wonderful tour we could have by using it, seeing the whole city from the air. We couldn’t resist and spent one whole day traveling by this fascinating transportation.

One ride on one line costs 3b. / 0,3€ and there are total 7 lines. In the next 12 years they plan to build another 16 lines, then it will be really possible to cruise above the city for a whole day. Now some lines are already in progress, but a round-tour is not possible yet, so we had to complete the circle by foot.

Read about our adventurous climb to Huayna Potosi near La Paz >>

Stroll through the city to the urban park

We started our tour on a yellow line, which station was close to our hotel, then switched to blue, white, and in the end orange, where we got out and strolled through the busy city, visiting the witch market and making our way back down to Socopachi neighborhood. In the near future, the circle will be possible to finish with a brown and purple line – check the picture of the map in the gallery.

On the way down we have also visited the city park Parque Urbano Central, expecting to find some nice green area to rest – well, that didn’t happen. This park is more of a concrete jungle with few green spots – those easy to find are covered by trash, the more hidden ones are occupied by young lovers. There is though one fascinating area and that’s the restricted area – of course, we went there and besides two stinking junkies found a wonderful abandoned playground with some really photogenic mosaic sculptures – definitely my highlight of the day. (Though to get out of there we had to crawl under a fence…). We finished this wonderful day tour on a Mirador in Socopachi and then in the best Vietnamese restaurant.

On Thursday or Sunday, there is a huge market in El Alto – a city above La Paz. To go there, we repeated the same Teleferic tour, just at the end station of orange line switched to red, which goes directly to the beginning of the market, at 4000 alt. meters. Then we went two stations by the blue line, which flies above the whole market, giving us an approximate idea how big this market really is. Though guides from the Free walking tour promised us this is a flea market, there were mostly goods from China and second-hand stuff was limited to cloths and car parts, quite disappointing…

The Air tour above La Paz

If you get a chance to go to La Paz, don’t miss the opportunity to see the city from the Air. Start with a yellow line down to Libertador station, then switch to the blue line and go one station to switch to white. Stay on the white line till the end station, enjoying some nice views of the city, as well as the white peaks surrounding it. At the end of the white switch to orange – just before the end station is a small interesting grave ground. Switch to red line at the end station of orange and enjoy the ride up to El Alto. Then get out and stroll through the interesting streets of this blooming city – if you manage to come on Thursday or Sunday, you will be able to shop at one of the biggest markets in the world, supposedly it takes the whole 5 square km! Then go back down with the red line, get out at the end station, and stroll through the city towards the city center and Parque Urbano Central. The whole trip will cost you 18b. / 2,2€.

Prev:
The best places to take picture of sunsets in Copacabana
Next:
El Choro trek - the most popular Bolivian hiking trail going bad