Snow hike to Snežnik and how you shouldn't do it

January 20, 2019
Hiking in Slovenia is a national sport, and no winter time or snow can stop these avid hikers from their favourite activity. Read the story about my first snow hike to Snežnik, a wonderful day trip in Slovenia, and how you shouldn’t do it. 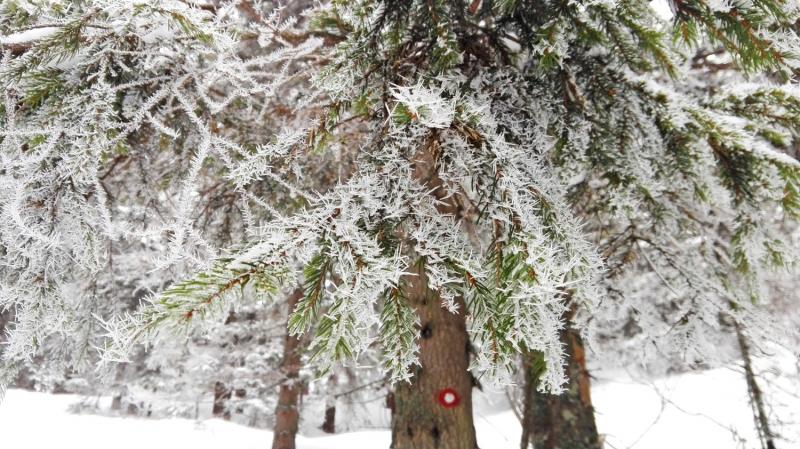 *This story was originally published in Slovene Kibubazin, where it won 1st prize in competition Winter stories

Let’s go hiking in the snow

Do you know the joke about a Czech hiking to Triglav? You probably don't, but all the Slovenes do thanks to all the hilarious stories about mountain services rescuing Czech hikers in sandals several times a year. Well, that might be a story about me. My first time in Slovene mountains I picked the highest one to climb, I hiked in running trainers and had one granola bar in my backpack... Well, that's a completely different story, now I want to tell you the one, how I went snow hiking for the first time.

One day in February my friend Neža has approached me and said: “Let’s go hiking in the snow, it's gonna be fun”. Primož, who usually goes with us and has loads of mountain experience, was skiing in France so it was only the two of us and I knew, it’s not gonna be that pink as she said. At that time, I didn’t know yet, that Neža always picks the longest way, because she goes hiking, not sitting in a car. I also didn’t know, that her favourite reply to all kind of possible problems is “No problem, we will manage.” I’ve learned it all that Sunday morning in January…

In winter, Snežnik is one of the best day hikes in Slovenia

The plan was to hike up to Snežnik in south of Slovenia, which is one of the best winter hike due to it’s accessibility and proximity to Ljubljana. Only 1,5 hour in the car and we have arrived to Leskova Dolina – our starting point. There are several ways up, but this was the one where we would make the least driving and the most hiking. The estimated hiking time was 3,15 h, but Neža always say, “That’s for amateurs, we are fit!” We were about to learn, that the timing is completely different in the winter.

The first issue occurred, when we went of the cleaned road and Neža’s little city car got stacked in the deep snow. We’ve only been trying to get it out for about 5 min, when a huge four-wheeler came out of the woods, with even huger forester in it. We were on his way out of the forest so there was nothing else he could do, than to help us. Without hesitating, he rolled up his sleeves, grabbed a big shovel from his truck and started digging out our little car. In the end, he even had to jam his huge body inside of the car, because Neža thanks to my “professional” instructions on which side to spin the wheel, couldn’t get it out.

“All right, leave it here, nobody else is gonna come today. Where are you even heading girls?“

“To Snežnik” we replied proudly

“Jooj, that’s like 5h hours to the top, rather go home”

“No problem, we will manage…”

I think he called the mountain service after we left, to let them know, there are two crazy chicks hiking to Snežnik in knee-deep snow. We were on the other hand thinking, what 5 hours!? 2 hours max and we are on the top…

Hiking trails in Slovenia are well marked, but…

One of the reasons, why Slovenia is such hiking paradise, is because the hiking trails in Slovenia are well marked. That’s said, it only applies if you find them, and in the winter, they are often covered by snow. So we have found the first one, and headed in that direction. After half an hour of chitchatting, we realized, something is not right, as we haven’t seen any marking for a long time. And our suspicion was confirmed by google maps – we were further from the top, than before. Without making a big deal from it, we just followed the path further and turned left at the first chance we got. Another half an hour and we saw a second marking and also a track from skis. Without hesitating, we just followed it, because, where can a skier go, we can too, right?

Soon enough, we came to a forested slope, which started elevating rapidly and where also the ski track ended. Once again, there were no more markings, but without giving up, we bravely stepped in the knee-deep snow and started hiking up. At least, we will have a nice bum from this exercise. Soon enough, the markings appeared again, this time a bit different, but as we were getting closer to the Croatian border, we just thought that’s how they do it here. So we kept walking to the top, looking forward to the view over white Slovenia all the way towards Croatia.

Why I’m hiking in Slovenia? It’s for the views!

And we’ve reached the top and we got the view – at the mountain Snežnik very far away from us. We’ve been hiking for almost 3 hours at that time, tired from endless snow, watching the clock not to lose track of time, as it gets dark very early in winter. I’ve almost cried. I didn’t even have any food with me as I was counting on the mountain cottage at the top of Snežnik and its delicious soups. We looked at each other and she said something I’ve never heard from her before or after: “Let’s go back?” Before we did that though, we sat on a sunny spot, shared Neža’s snack and enjoyed the view to the top of Snežnik, which will have to be conquered another time.

The way back was rather fast – running in the snow and sliding on our asses, we’ve only needed about an hour to get back to the car, which was waiting for us exactly there, where the friendly forester left it. And what were the special markings we saw on the trees? Two horizontal red lines are markings of forest borders, as we found out a week later, when Primož has returned from his skiing trip…

How to make right your day trip to Snežnik in Slovenia

Two years later, with much more mountain experiences and after conquering Snežnik (1796 m) from the other side, I can give you the advice I didn’t have that lovely winter Sunday. So you can make Snežnik one of your best day hikes in Slovenia:

Where else to go hiking in the winter in Slovenia?

The mountains in SLovenia are in the wnter covered by snow and not all of them are suitable for hiking, unless you are an experienced ice-climber. Most of the lower ones though can be hiked and wwith their white blanket, they promise amazing winter adventure, those are for example:

And much more other which will appear here very soon...

Prev:
8 beautiful hikes to lagunas around Huaraz, Peru
Next:
8 amazing things you should do in Ica, Peru