Discover beautiful nature on an easy hike in Savinja Valley

September 17, 2018
Easy round hike showing some beauties of Savinjska Valley in Slovenia leads through forest and grassy fields to the top of Lepenatka (1425 m), then continuing on a rocky terrain to Veliki Rogatec (1557 m). Read my adventurous story with a step-by-step guide and GPS track. 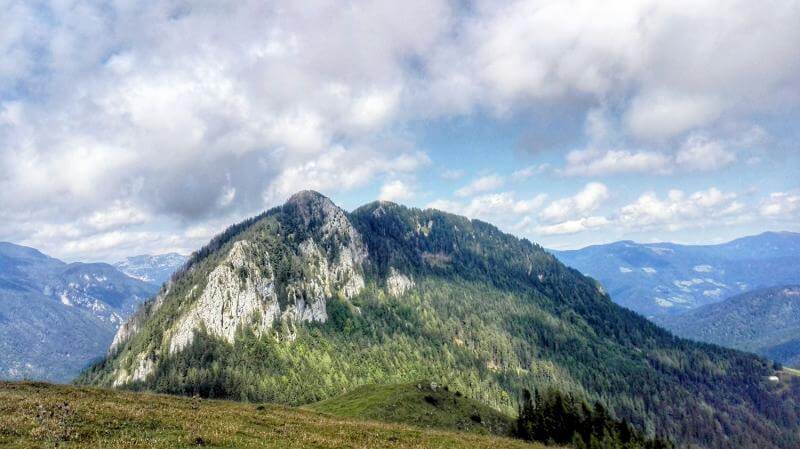 *This article contains some affiliates links to sites, from which I receive a small reward if you make a purchase from them. Because of this, I can run this blog easier.

Primoz has planned this round trip when my sister and her boyfriend were visiting in September 2017. It's a nice and easy round hike showing all the beauties and terrains Savinja valley has to offer – forest, grassy fields and rocky terrain requiring some climbing. He chose this hike because it’s easy enough also for people with not much previous hiking experience, but still requires some physical stamina.

The hike starts at Lenart pri Gornjem gradu. First, we drove to Gornji grad, which is approximately 1 hour from Ljubljana, and turned to a gravel road before reaching this town towards Lenart, on which we drove until we reached a small crossroad with hiking road marks where we parked and continued by foot towards a small chapel.

By the chapel were some workers who warned us, that on the path in the woods is a nest of forest wasps and we should rather take the gravel road going a bit around. But we decided to go through the forest anyway and save 20 minutes of time. We all have regretted it later…

As we walked through the forest, Primoz warned us to be quiet and step softly, that wasps don't attack without reason. So we started tiptoeing on the forest path like ballerinas. At one point he said, we probably passed them already, but only seconds later, he turned around, looked at me and pointed under his feet, continuing slowly and quietly forward. As I looked down, I could see the wasps flying out of their underground nest. If you don’t know it yet, I hate wasps!

I remember it like it was yesterday, my heartbeat fastened in a split of a second while my brain sent an order to my legs to start running. But before they received it, the wasps attacked, just like that, without any warning, or reason as a matter of fact. I started screaming and running, which just made them angrier. Soon my sister, who froze when she saw them, hoping they won’t notice her, started screaming too and run in the opposite direction.

So there we were, on a little path in the middle of the forest, divided by a swarm of huge forest wasps, screaming at each other what to do. Paja and Vojta then took a big detour through the forest to join us and together we reached the gravel road (the one we regretted we didn’t take at a first place) and started counting stings. I got three, Paja four, Vojta and Primoz each one. It was hurting like hell and terribly itchy for days.

From grassy field to rocky mountain

With me crying like a little kid, we set on the road again, soon meeting actual kids who were also stung by the wasps, but unlike me, they were not crying, that sure dried my tears… We continued for 40 minutes through the forest, then another 40 minutes on a grassy field until we reached the top of Lepenatka (1425 m) and found a perfect sunny spot for a snack with a view at the top of Veliki Rogatec.

From the top of Lepenatka, we went downhill for around 20 minutes until we reached a crossroad at mountain pass Kal, where we’ve chosen to continue on a very demanding path. This climbing path leads on a south wall of Veliki Rogatec and on its ridge till the top. There are few dangerous spots, all secured by wires and iron steps. There is also an alternative path up.

Though it was sunny at Lepenatka, the sky turned black while we were climbing up Veliki Rogatec and the weather started to be really gloomy. As we were reaching the summit, first raindrops started falling and black clouds were threatening by some really ugly storm. We haven’t enjoyed the summit much and hurried down on a bit easier path, passing burned trees from a fire several years ago. But as we still had an hour and a half to come to the car, we ended up wet anyway…

All wet, but happy we survived the storm and wasp attack, we finished this hike in Pizzeria 902 in Gornji Grad, right next to the beautiful cathedral. They have a great selection of delicious pizzas, and of course, Slovene beer to alleviate the wasp sting pain.

Every time I go hiking, I learn something new. What have I learned on this hike?

Prev:
The story of Jesuit missions in Paraguay in photos
Next:
Trip to Iguazu falls in pictures and some interesting facts